Brexit fails to dampen sector thanks to a resurgent public sector spending and continued infrastructure activity. And there’s change at the top as WSP, Jacobs, RSK, AECOM and Mott MacDonald lead the pack, while APEM, Delta-Simons and Sweco enter EA’s Top 30 for the first time.

The UK market for environmental consultancy (EC) services experienced its third-highest annual growth in a decade at 6.7% in 2018, lifting revenues to a record £1.77bn, according to the latest research report published by EA. Growth is expected to come in at 4-5% in 2019 and 2020, dampened only mildly by the transition in infrastructure investment cycles and the impact of UK-EU trade negotiations as Brexit hits home. WSP is the newly-crowned sector leading provider.

The fully updated and expanded edition of Environment Analyst’s annual UK Market Assessment of the Environmental Consulting Sector (report) is based on the financial statistics (FY2018/19) and detailed company profiles of the leading peer group of 30 EC practices based in the UK, as well as Environment Analyst’s wider annual company survey results. 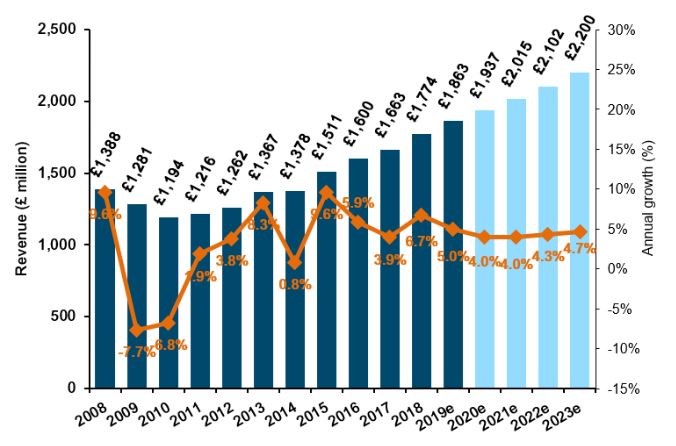 The report finds the Top 30 EC players account for almost three-quarters (74%) of the market (based on gross revenues in FY18/19 before any sub-contracted fees). A decade of acquisitions and consolidations have left the Top 30 with a distinctly international feel with just under half (14) of the UK’s leading environmental consultancies now owned by businesses headquartered overseas [of which eight are North American].

Five firms alone make up just under 30% of the market, up from 27% last year. This marks a dramatic shift from ten years ago when the Top 5 accounted for just 12% of the UK EC market (Figure 2). Historically consolidation has seen smaller to midsize firms swallowed up by the larger multidisciplinaires, which in turn opens up space for upcoming players to grow. This year’s report sees the entree of APEM, Delta-Simons and Sweco into the Top 30 for the first time as their UK EC turnover surpassed the milestone £10m mark.

WSP is now the UK’s largest EC provider [by revenue] with a market share of 6.5%, followed by Jacobs, RSK, AECOM and Mott MacDonald. RPS, Arcadis, ERM, SNC-Lavalin and Arup complete the top ten.

Seven companies achieved substantial growth (>20%) in their EC revenue during the period – Capita Real Estate & Infrastructure, Cefas, Delta-Simons, Mott MacDonald, RSK, Stantec and Sweco – while a further six saw in the region of 10-20%. Only four of the Top 30 saw revenue decline in the latest year analysed, with their topline impacted by Brexit-induced uncertainty from some key clients.

Most of the 8.5% growth in revenue recorded by the Top 30 was achieved organically (+7.4pp). Although there was a slowdown in global industry mega-mergers, there have been a few mid-market acquisitions of note impacting the sector rankings and market share - including Canadian Stantec’s purchase of one os last year’s Top 30 firms PBA (EA 11-Sep-18), and another North American player NASDAQ-listed Tetra Tech’s £43m purchase of WYG (EA 20-May-19).

However, the bulk of recent M&A activity has been dominated of late by smaller-scale bolt on acquisitions with RSK – and its £315m funding package from Ares Capital Europe (EA 18-Dec-18) – proving to be the most active of all the Top 30 with no less than twelve purchases in 2018/19 and eight so far in 2019/20. Private equity interests in the EC sector are also solidifying with Charterhouse Capital Partners acquiring a majority stake in SLR (EA 27-Mar-18), and freshwater ecology specialists APEM turning to WestBridge Capital to facilitate a management buyout (MBO) last year (EA 13-Mar-19).

The Canadian-headquartered market leader WSP snapped up the 115-strong urban planning and communications consultancy Elton Consulting Group as one a plethora of acquisitions it has made globally of late in pursuit of becoming the world’s premier environmental consulting firm (EA 12-Feb-19). The fact that WSP has now made it to number-one in the UK - one of the most mature and developed markets for EC services globally - is a step towards meeting this lofty ambition.

WSP’s rise to the top has been aided by some transformative purchases, having ranked in ninth only five years ago, including Parsons Brinckerhoff (EA 06-Nov-14) and Mouchel (EA 13-Oct-16). Since 2013, WSP’s UK EC turnover has more than tripled to over £110m, while its EC staff contingent has grown from c350, to over 1,200 in the same period.

In terms of the industry spend, there was a major uplift in public sector spending on EC services of 18% in 2018/19. Demand linked to government-backed infrastructure projects, Brexit preparations, Environment Agency frameworks, international development programmes and under-resourced local authorities have all kept the industry busy. But this is not an outlier, spending from the public sector has been gradually increasing since 2015 (Figure 3). The public sector now accounts for 22.5% of all EC spending, although this remains down from the 33% market share held in 2009. 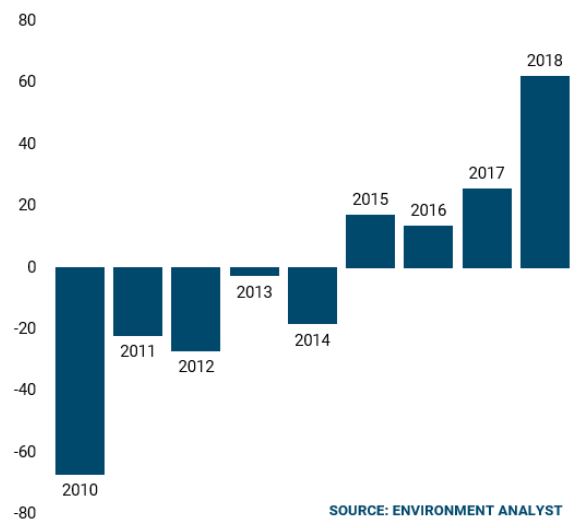 "While it is too early to say that austerity has completely come to an end, it is clear that government departments, agencies and local authorities are reaching out to consultants more and more to support their environmental programmes," says Environment Analyst research and editorial manager Ross Griffiths. "EC firms are stepping in to help the UK’s under-resourced public sector deliver their committed and statutory environmental obligations and navigate the post-Brexit regulatory framework."

Infrastructure and development clients (across property, construction and transport) continued their spending spree with 11.4% growth adding another £54m to the market as rail, highways and housing developers ramp up spending. Key to this has been Highways England’s first road investment strategy (RIS1), Network Rail’s fifth control period (CP5), the UK’s drive to deliver 300,000 homes annually and of course HS2, which is now forecast to cost in excess of £100bn to build.

"The UK’s long-term investment in infrastructure over the last decade has proved the single most important factor in restoring the UK EC market to close to where it was prior to the recession," adds Griffiths. "Mega projects like HS2, Heathrow expansion, the Lower Thames Crossing and Hinkley Point C provide a long-term safehaven for environmental consultancies as they navigated through the recession, austerity and Brexit uncertainty."

While public sector and infrastructure spending will continue to be incredibly important to this industry, there are signs that the demand for sustainability & ESG advisory services from the services sector is on the rise, in a big way - such is the urgency needed to tackle the planet’s climate crisis. Our figures show the financial and service sector clients spent an additional 18% on EC services driven by the demand for ethical investing, due diligence, ESG, corporate sustainability and climate advisory services.

From a service area perspective, the water quality and resource management discipline overtook impact assessment as the UK EC sector’s number one revenue earner, with growth of 18% taking market share to 16.6%. The increased spending on EC firms from water utilities during their sixth asset management plan (AMP6) as well as the Environment Agency means this discipline has seen an additional £116m added since 2014.

Perhaps one of the biggest turnarounds occurred for those consultants offering waste management/circular economy services – which has suffered from years of under-investment. This discipline recorded its first year of double-digit growth since 2006, with an uplift of 16.8% year-on-year driven by efforts to move the UK’s waste sector from a linear to a circular model.

The noise & vibration (+8.4%) and contaminated site assessment / remediation (+7.6%) service areas also recorded notable growth, but there was a disappointing decline of 19% in revenues from environmental management & compliance services.

Environmental Analyst has lifted the UK EC market forecast this year to a five-year CAGR to 2023 of 4.4% (compared to the 3.0% in our last report), reflecting growing optimism among EC business leaders and confidence that the key underpinning market drivers remain solid in the face of Brexit. Ongoing infrastructure commitments, a raft of encouraging policy announcements and expectations of further government spending are expected to yield an additional c£430m from this market space by 2023.

"Despite the concerns and worries that have dogged this sector since the UK voted to leave the EU in 2016, our latest figures show environmental consultancies have been incredibly resilient to the slowing economy," says Griffiths. "While optimism is not quite where it was prior to the Brexit vote, continued spending and momentum in sustainability is helping it grow year-on-year."